In late 2011 I started work on a new companion app named Tattoo Management Studio Touch. It hid away a lot of complex parts of the TMS interface, and put a touch friendly, more point-of-sale like appearance on things. Its design was inspired by the tile interface from Windows Phone 7 and Windows 8, which had not yet been released to the public. 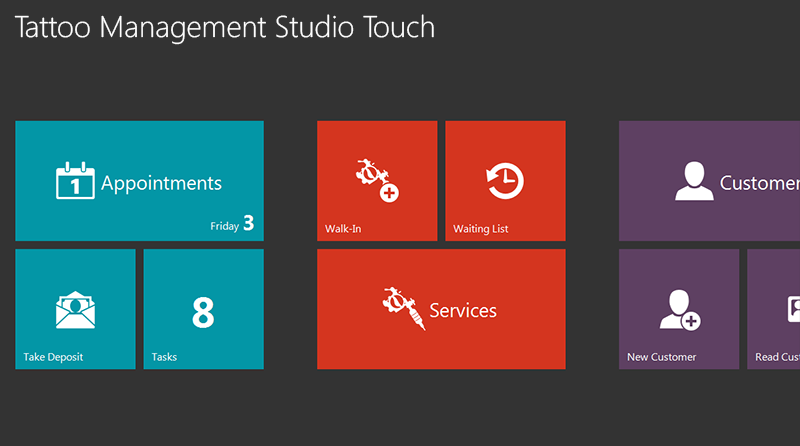 In summer 2012, Touch was getting closer to private beta, but I was drowning in support calls and emails. By the time the support calls would wind down for the day, around 8-9p, I didn’t have the mental capacity to write code. I needed to hire someone to take care of customer service so I could get back to coding… but while there was enough money to support my family and pay the bills, it wasn’t enough to hire anyone.

One morning in July the first call of the day came in. I looked at the caller ID which showed it was Painful Pleasures. Not an unusual call to get, as they used REV23 software in two of their studios and I had a great working relationship with them. I picked up the phone, prepared for the usual “have you tried rebooting?” routine of most support instances, but this time the call was much different. They didn’t need tech support… they wanted to acquire REV23.

I wanted to build a successful business, but I never considered that someday someone might want to buy it from me. Selling REV23 was never planned as an exit-strategy for me. But besides a business, I had also built something that was like an extended member of our family. It was (and still is) a part of us. Painful relied on REV23 in their studios and wanted to make sure it didn’t disappear like other products had been; they knew the industry needed REV23. It was a lifeline. With the buy-out, they would retain me as a developer and visionary, but hire support staff and use their sales channels to promote it. I could sneak back behind the curtain and just write code and other people would deal with literally everything else, which is what I had wanted since the beginning.

It took a lot of soul searching on my end to reach a decision. REV23 was my baby. To no longer be the owner was a difficult concept for me to wrap my head around and I struggled with it a lot.

On September 13, 2012, Painful Pleasures officially acquired REV23 Development. That morning, with them in Hanover, Maryland and me in Denver, we both signed and faxed the final papers. No less than fifteen minutes later, myself, along with my wife and daughter were in the car driving to beautiful Keystone, Colorado for the Paradise Tattoo Gathering, which I had already locked down a booth for months before. It was a surreal drive, filled with emotions of both joy and mourning and everything in-between.

We hired a technical support/customer service rep and I worked to strengthen the core software with even more new features. With less time spent on support, I had more time to get back to coding and building the next version of the software. Touch was put on the back burner while some more pressing things were addressed and stabilized. With the software better than ever we could loop back and release Touch with a stronger core.

Meanwhile, Windows 8 was released to extremely poor reviews. Users did not like the new tile-based interface, they found it confusing and was generally disliked-- for the record, I liked it as was evident by my banking the future of REV23 on the concepts it contained. Touch was now even further away from a reality as I hadn’t been updating it to keep up with the new changes to the core software which were being released at a lightning fast rate. In the end, after several delays, Touch had to be abandoned, which killed me to do. I never got to find out if Touch would have been the success I predicted. The failures of Windows Phone and Windows 8 provide some insight, but the few demos I showed to trusted users were largely positive.

As a special treat, and in the spirit of the historical nature of this blog series: I present to you two videos of what this interface looked like that I was able to recover. Only a very small group have ever seen Touch in action, so I’m very happy to show you what might have been from a very early build in 2012 as I was first experimenting with the new UI. In fact, I hadn’t even named it Touch yet, it was “Tattoo Management Studio Point of Service” at the time, which was quite the mouthful. Luckily, I had the sense to come up with a better name.

The second video demonstrates another more refined UI from 2014, probably shortly before it was officially canceled. Though there were many improvements, especially in the sales screen that had been further fleshed out that aren’t seen here.

Some of the concepts from Touch did make their way into Tattoo Management Studio though. The Control Panel is the biggest example of this, though does not represent the same immersive experience that Touch had. Other elements that came over are the overlays for scanner/webcam when hovering over images as well as some prompts, such as the screen to print receipts/aftercare. I still really liked the Sale screen in Touch and hope to bring something like that into Desktop in the future.

During this period, I was also able to work on extending “XRMS”. Behind the scenes of the software you use in your studio each day is our custom-built Customer Relationship Manager (CRM) and Content Management System (CMS) that we call XRMS. It handles users, orders, software licenses, subscription management, this blog and more. It is the truly the backbone of REV23 operations. I built XRMS alongside Tattoo Management Studio very early on and it is an integral cog in the REV23 machine. It looks and functions nearly identical to REV23 Desktop because they’re developed so closely together and XRMS used to the be test bed for newer things being added, such as the Virtual Receptionist (emails you receive during a trial period, or when your subscription has been suspended are using the same VR system), as well as Dashboards, and other random features in Desktop.

After a couple of years, our tech support employee accepted a job offer elsewhere and rather than replacing them, I took over the responsibility of support again. Having had the support buffer for that time allowed me to flesh XRMS out to automate many otherwise manual, time consuming tasks; and with Tattoo Management Studio matured even further, adding the extra responsibility of support to my plate was not nearly as daunting, though it still consumes most of my days today.

What I’ve learned during this time is that running from being “the face” of REV23 was futile. It can’t be anyone but me, at least for now. Desktop is such a complex organism that it needs that personal touch. This keeps it genuine. It keeps it authentic. Being the person to travel to tattoo conventions, do tech support, sales, and write the code is a lot of weight, but I wouldn’t have it any other way. Sure, I’m no longer the owner of REV23, but I still very much treat it like I am. Today I still put the same care, attention, focus and long hours into it as I did in the early days, and I think it shows. One day perhaps I’ll be able to step back from at least tech support. But being out at conventions and meeting people, and even more unreal, having people excited to meet me, is something I truly love. It also allows me to see trends, and get direct feedback from current, past and potential users of what we’re doing right, or what we could be doing better.

The name REV23 is another thing I had tried to run from that we’ve finally just accepted. I used “REV23 Development” as the company that wrote Tattoo Management Studio. I thought this would be an easy distinction. Man, I was wrong. It was bad naming and mostly just confusing. Again, I’d like to mention I’m not a marketer, but I do play one in real life. “Tattoo Management Studio” was just a bad name in general and after years and years of people referring to our software as simply “REV23” or some incorrect combination of the words tattoo studio management software, we doubled down on the REV23 name and renamed TMS to REV23 Desktop in March 2017.

To recount every milestone REV23 has accomplished under Painful Pleasures would not be super interesting and would extend this already lenghty post. Not to say we haven’t done anything worth discussing. Quite the opposite! The software is better than it’s ever been. For me it seems like “the present”, the current chapter, like I would be narrating something as it’s happening, though it’s been over seven-years with them now. Many changes to the software have happened, more users have come, and some have gone. It’s mostly like clockwork at this point.

And that journal entry from Pt. 1 that I wrote to my daughter Gwen? She’s 11 now, and she knows exactly what REV23 has accomplished and what it’s done for our family. She proudly rocks REV23 stickers on her computer and pins on her jackets. It’s all she’s ever known. She and my wife bleed REV23 as much as I do. It’s just as much a part of them and it’s not uncommon to see them at conventions with me. My hope is that someday she’ll be involved in part of REV23. Perhaps in another few years you’ll email tech support and it will be Gwen on the other end asking if you’ve tried rebooting.

I’m not sure where REV23 would be today without Painful Pleasures. I’d like to think I could have made it; but possibly not without more blood, sweat and tears than I had left to give.

With our tenth anniversary quickly approaching, we’re now focused on the future more than ever, and in our next post in this series, we’ll talk a bit about what's coming and why its taken so long.

Thanks for reading! What do you think of Touch? I'm disappointed it was never released. Perhaps it would have been a huge success and really put REV23 on the map even more so, or maybe it could have had disasterous consequences.

Do you have any questions or comments about our journey? Let us know!