March 1st, 2020 is the ten-year anniversary of the release of REV23 Desktop. This post is the first of a multi-part series celebrating ten years of REV23! In this blog series we’ll explore how REV23 came to be and reminisce the early days. We'll show you some pieces of REV23 history that have been long forgotten or never came to be. Next, we’ll recap how we got to where we are now, and finally we’ll reveal where we’re headed and what we expect for the next ten years!

In reality, REV23 began nearly a decade earlier, all the way back in 2002. But not as a software company. I was the lead guitarist in a once “promising” metal band in Denver, CO. We were planning to do a mini-tour as Seventh Sign, which was our original band name. During planning, we realized a state we were going to play in already had a band of the same name. Under pressure to come up with something fast, I came up with REV23 (shorthand for revelation 23, I thought it had an apocalyptic feel to it) and registered the new domain name. We continued to play as REV23 until we dissolved in 2004. 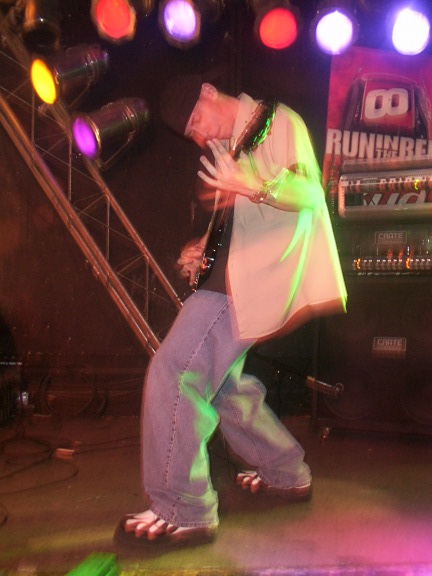 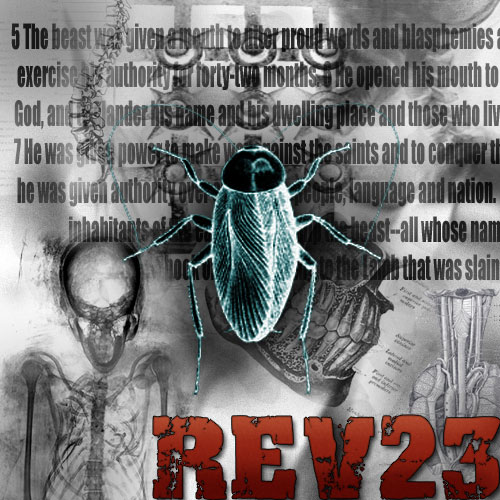 Registering domain names back then did not cost $0.99 like it does today, and while I don’t remember exactly what I paid to register rev23.com, it must have been expensive enough (or I was stubborn enough) to not let it go. So year after year, I renewed it, figuring I'd find something to do with it at some point. I made a career in software development, working in the corporate offices of popular restaurant chains, as well as workflow management software for home builders, which is where I learned the most about how to architect something as large as REV23. But I also liked writing code for myself and needed a place to upload things I was working on as well as a name to write it under, not wanting to use my real name. REV23 sounded just fine and I released a few small things. Notably, an IMAP email notification plugin for the popular chat/IM client Trillian, and a silly little Magic 8-ball app for the earliest Windows mobile devices that pre-date the iPhone. I also tried my hand at game development and made a Deal or No Deal game, based on the game show, which was never released publicly for obvious copyright issues. I figured out the banker logic and the whole game flow, but the visuals were never great. Not bad, but not great.

Fast-forward to 2007 when the REV23 you know today really started to grow some legs. I was being tattooed by a guy that had tattooed me a few times previously and during the session’s small talk he asked what I did for a living. He told me he needed a software developer for an invention he had. He had created a device that sat between the pedal and a computer to record the actual tattoo time and needed someone to write the device drivers. These days, this is included in a series of power supplies, but at the time, this hadn’t yet been done. I agreed, and I had taken my first steps into working in the tattoo industry!

The device never got off the ground but spending all that time in the studio and watching the daily flow led me down another path. There were so many repetitive tasks that could be automated with some custom software. Surely some kind of workflow management software existed for the tattoo and body piercing industry? Research didn’t yield much for tattoo studio software, or tattoo management software which was surprising. Modbase was around at the time, but it looked dated and not well supported and was later completely abandoned.

So, I decided I was going to tackle the world of tattoo studio workflow management software! I loved the industry and wanted to be a part of it; it suited me much more than the corporate career path I was headed down. But how could I make a mark here? I loved to draw as an adolescent; often my schoolwork had more doodles and drawings than the actual work itself, leading to several less than optimal report cards and parent teacher conferences. But I kind of peaked and never really got any better. Perhaps I'd be able to contribute to this industry with my other passion: technology.

For the remainder of 2007-2009 I coded what became the earliest bits of what you know as REV23. Parsing data from a driver’s license magnetic stripe was the first project. I tried to enlist the help of some developer co-workers, all of whom seemed interested and excited about it, but when it came down to getting work done, I was the only one that was actually doing anything. It quickly became apparent that I was more serious about this than anyone and I was just going to have to do it myself. So, after work each day I worked on REV23 while sitting on the couch watching TV with my wife. In 2008, we welcomed our daughter which slowed things down a bit, but when my brain could process it, I would continue writing code. It was a lot of 18-20 hour days.

While my wife Anna was pregnant she had a journal we would write in for our daughter to read some day. We didn't follow through with this practice long, and she added much more than I did. However, this is an excerpt from my first entry: 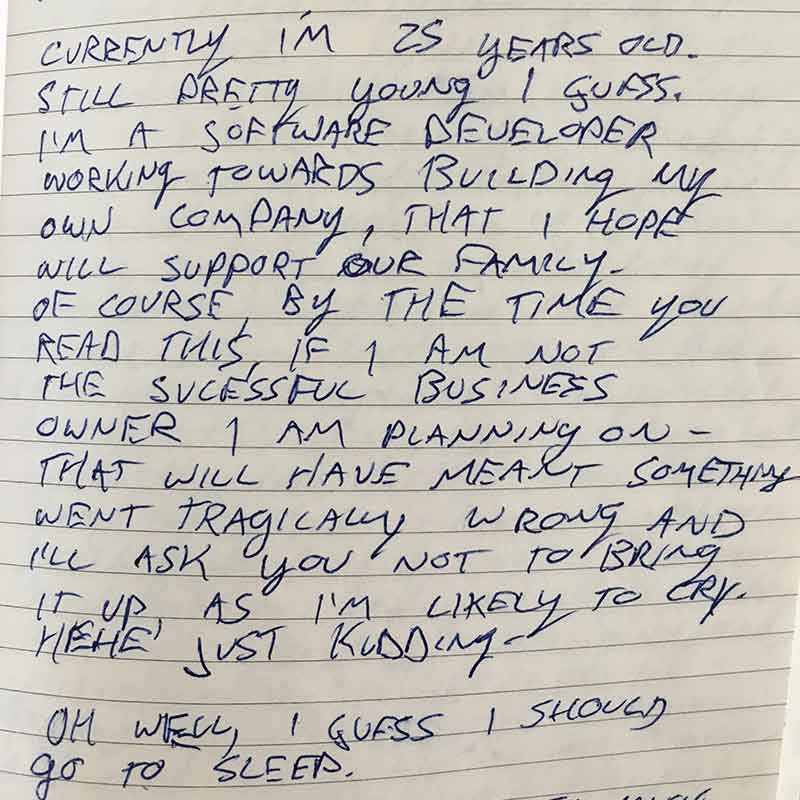 The original plan for REV23 at conception was a cloud hosted SaaS (software-as-a-service). "The Cloud" was not even a buzzword at the time (the original iPhone didn’t exist yet when early planning was happening), but I saw where things were headed and knew that was probably the right path. The problem was guidance on cloud architecture back then was not nearly as comprehensive as it is now. Also, subscription-based software was largely unheard of as it was still a very new concept, and I didn’t see it catching on with the industry. Ultimately, I shifted well into the development and mostly started from scratch on the architecture for what still exists today in REV23 Desktop. A local database with a Windows desktop client, with the plan being I would continue working on the “Pro” cloud-based web version after the release.

There was also a plan for a portfolio browser touch screen app that you turned pages in like pages of a magazine that was pretty cool. This sadly never got past the prototype phase, though I've often thought of resurrecting this idea. The original REV23 business plan that I had made ended up mostly useless as nothing actually went according to the plan, but there was a lot of stuff like this in that document. It sadly must have been deleted-- I could not find a copy of it for the purpose of this blog post.

I paid a company in Australia named glyFX to design the iconic tattoo machine logo that we still use a modified variant of today, as well as some custom icons to use in the interface. I used their stock icons in the rest of the user interface which had a nice modern Windows XP look and feel and wanted consistency with industry specific icons. They did a good job and I used them for several years until a visual refresh in 2014. The logo font was Segoe UI which I also used for many years.

By mid-2008 I was working as a programmer at some small company that did proficiency testing of water something or other. Honestly, I never really understood what I was doing there. The company contracted a large consultancy firm to complete a massive software project and they needed a developer to come in full-time and maintain this thing after they had left. With little to no training or explanation of what things were, I was hired and left to my own devices. Mostly I just sat there, waiting for someone to give me a task to complete or fix bugs as they popped up. I tried to be proactive and make work for myself, but there was just not much to do. I had no management or supervision and no direction. Just sit there in front of a computer day after day with no agenda and wait for something to happen, which it rarely did. Sounds like a dream job for some. Not particularly for me. I’m not great at doing nothing, and for a new father who just wanted to be home with his family, it was kind of torture. On the up-side, I had a lot of time to work on my new tattoo software, so I ended up getting a lot done while sitting there throughout the day. They also didn’t care that I was tattooed and there was no real dress code for me, which was another plus.

The software was getting closer to release and I was right at the finish line and by late 2009 the company I was working for had been acquired by a large corporation who came in and shook everything up. I was an immediate target because I didn’t fit the norm of what a software developer in corporate America should look like and things were made miserable for me fast. Going from nothing to do to constant micro-management, which just didn't work well for me. One day, after a blow up with my new boss in a meeting I made one of the biggest (and ultimately one of the best) decisions of my life. With a wife, a fifteen-month old daughter, a mortgage and little to no savings in our bank account I stormed out of that job (don't try this at home, kids!). The next day, March 1st, 2010, I launched Tattoo Management Studio Express 1.0. I had no idea what I was doing or how things were going to go, but I knew it was time to try.

Thanks for reading our origin story! I hope you enjoyed reading about the history of the REV23 and learning how/why it was first developed. In our next post, I will talk about the early days, covering 2010-2012 or so.